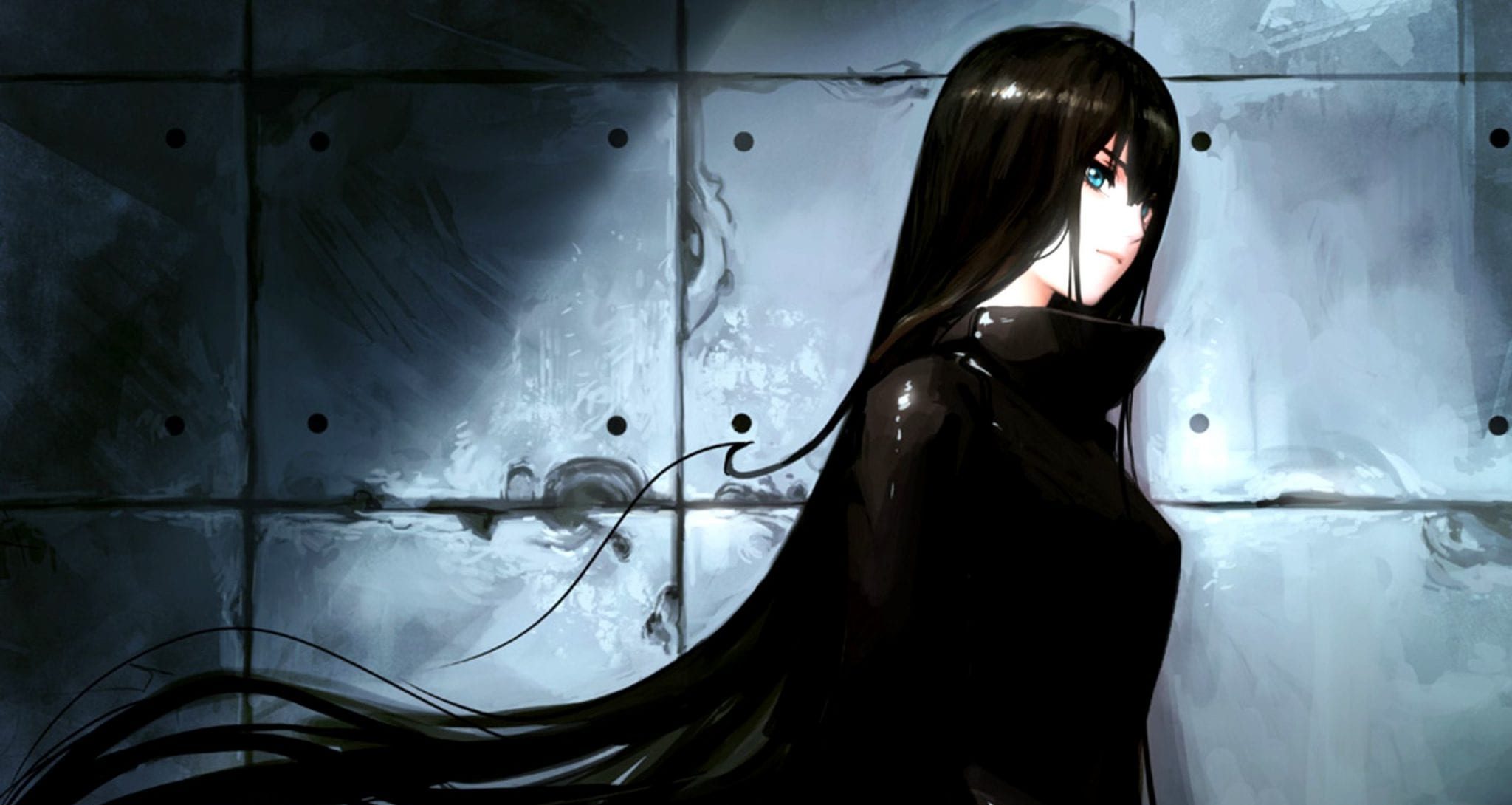 Do you know who an emo girl is? A girl wearing dark clothes and makeup, who usually has a dark or calm personality, is an emo girl. You will often find an emo girl enjoying her own company because she likes to stay away from the crowds and the spotlight. Emo girls will also very often have dark hair – usually cropped short. Some emo girls are also misunderstood as being depressed or suicidal, although this is not always the case. Their personalities just make it seem like they are.

Hmm, would you like to have your own emo girlfriend? A pretty sensitive girl who also has a nervousness specific to her style. Maybe she has a badass attitude but also knows how to show affection towards those close to her. If so, we’re here to give you a taste of the top 8 emo anime girls that have been handpicked especially for you! Keep scrolling to find out how these girls behave and what they like.

Rukia Kuchiki is an extremely down to earth girl. She has dark hair with beautiful purple eyes. Even though she is extremely humble and sympathetic, she chooses to be alone. She doesn’t like to share her problems with her friends. Although she is very good at making up stories or convincing other people. Oddly enough, she is never able to think about what to wear. Most of the time, she ends up borrowing clothes from Yuzu, who is Ichigo’s sister. She is an exceptionally cute girl who gets sad when someone offends her obsession with rabbits. Overall, she is a really nice and straightforward person. All you have to do to win her heart is feed her dumplings and gift her a stuffed bunny!

As mentioned above, Rukia is a character from “Bleach”. This TV and Web Anime series is available for you to watch on online platforms such as Netflix, Hulu, and Crunchyroll.

2. Saeko Busujima from “The Secondary School of the Dead”.

Saeko Busujima is studying at Fujimi High School. She later becomes part of the group that eliminates the zombies to save the world. She has dark purple hair and is quite tall. Throughout the series, she dresses in different ways – sometimes in traditional outfits and sometimes in suggestive and skimpy outfits. Saeko has always been a caring person who gave off a very protective and motherly vibe towards everyone else in the group. She also has a one-way mind and is able to remain calm even under pressure. But, she also has an evil and sadistic side that is only exhibited when she uses her mighty sword to kill zombies. In any case, she is a strong, beautiful and confident woman who is not easily discouraged. 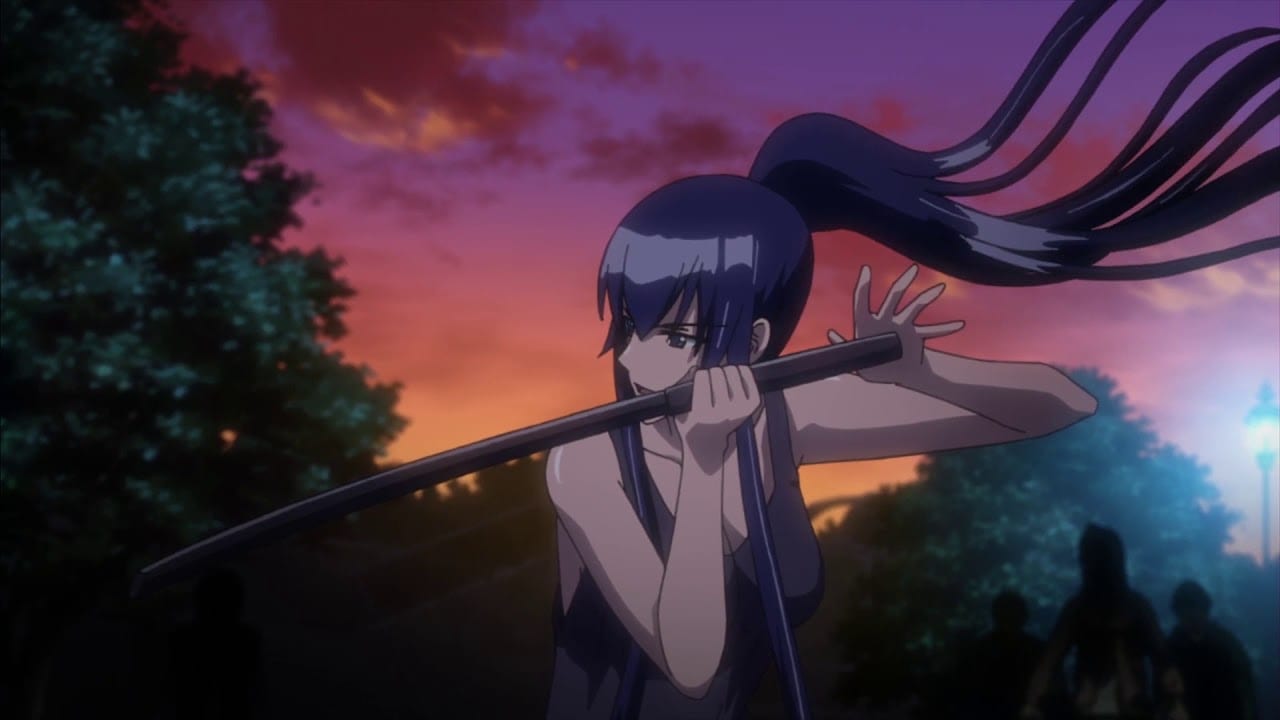 Saeko Busujima from ‘High School of the Dead’, C (Madhouse)

As mentioned above, Saeko is a character from “High School of The Dead”. This Anime TV and Web Series is available for you to watch on online platforms such as Netflix, Hulu, and AnimeLab.

Touka Kirishima was a student at Kiyomi High School. She is also a ghoul. Touka is a beautiful woman who has short dark purple hair, almost black. No one can imagine that such an adorable girl would be a ghoul. As the story of the Anime series progresses, it is noticeable how shocked almost all men are at how gorgeous she is. Touka was known to be a very mean person, but this was all just a facade because deep down she was an emotional, gentle and kind girl who had had a traumatic experience at a very young age.

She does not know how to control her emotions and ends up exploding very often. She doesn’t like the fact that she’s a ghoul and thinks she’s pretty useless. Over the years, Touka has become a very caring person who knows how to express her emotions well. She is even able to finally admit that she is in love with Kaneki. 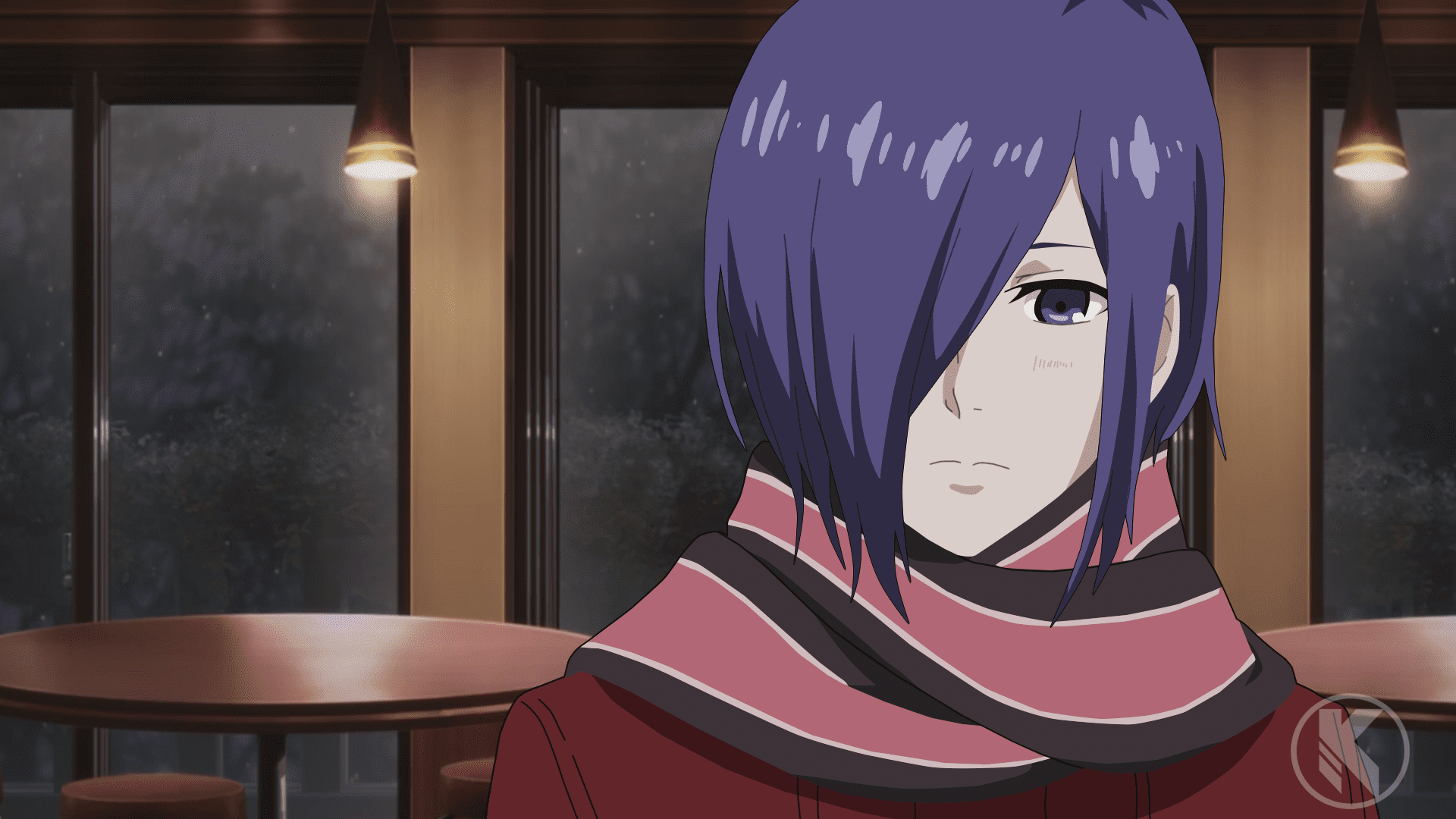 As mentioned above, Touka is a character from “Tokyo Ghoul”. This Anime TV and Web Series is available on online platforms such as Hulu, AnimeLab, Crunchyroll, Funimation, and Netflix.

4. Mikasa Ackerman from “Attack on Titan”

Mikasa Ackerman is a deuteragonist. She had an extremely tragic life as her parents were brutally murdered. Even though she was an extremely peaceful person, her fate led her to be one of the best soldiers in the military. Mikasa is a strong and tall woman, and she also has short black hair. In her childhood, she was a very happy child. As she got older, she began to mask her emotions as she gradually began to lose all of her loved ones, and thus, she was still very protective of her friends. She even guides her friends and tells them what to do and what not to do. We still see how she keeps a black scarf close to her, which was given to her by her late lover, Eren. 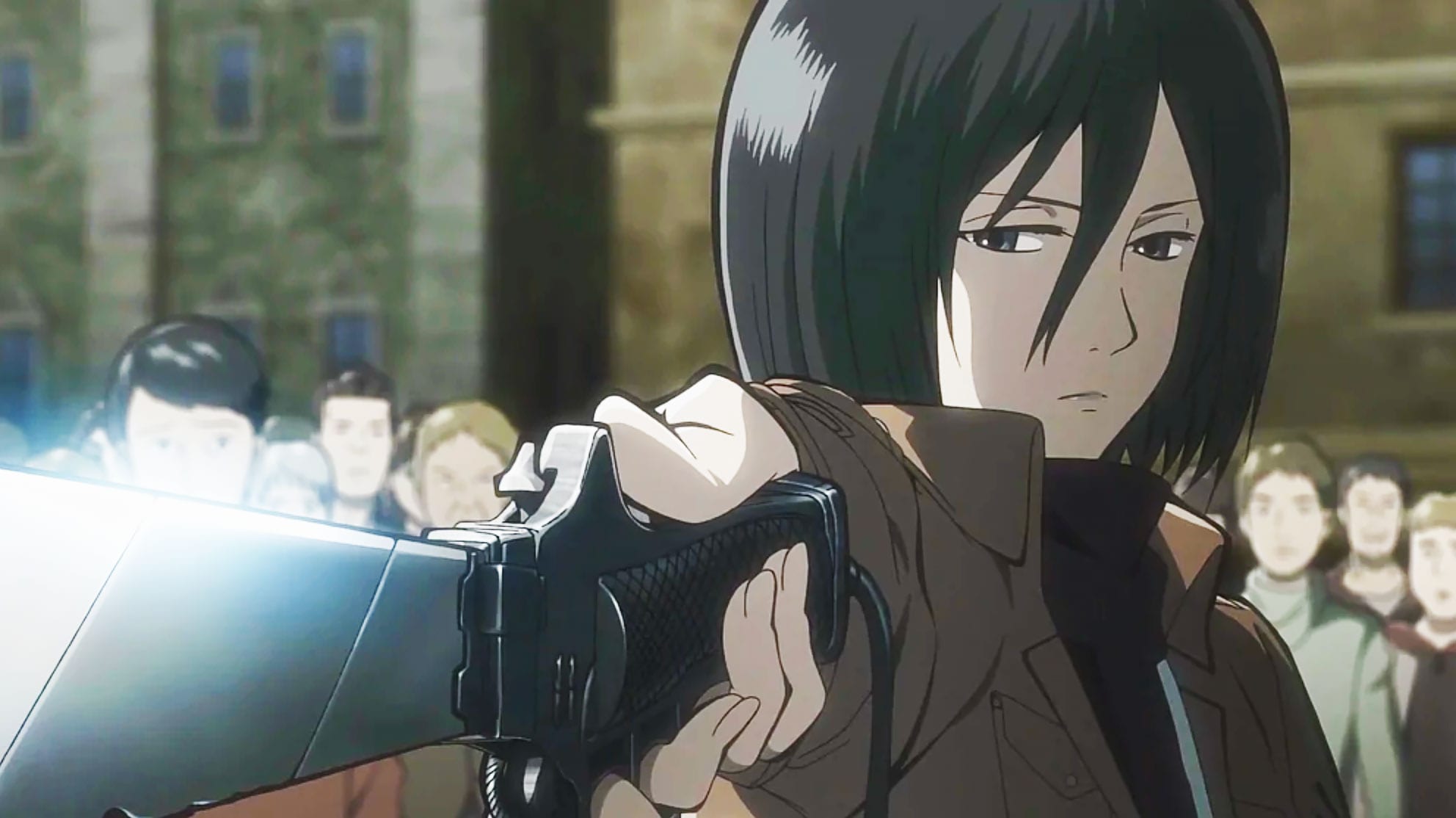 Mikasa Ackerman from ‘Attack on Titan’, (Wit Studio and Mappa)

As mentioned above, Mikasa is a character from “Attack on Titan”. This TV and Web Anime series is available for you to watch on online platforms such as Netflix, Adult Swim, and Prime Video.

5. Dalian from “The Mystical Archives of Dantalian”

Dalian is known as the “Black Reading Princess” because she is obsessed with reading books. She can often be found drinking tea, eating dessert, or reading books in various other languages. Dalian is a little girl who looks a lot like a doll. She has bright red eyes with long black hair. Dalian is not a very sweet and caring girl and is often very rude to the people around her, especially Hugh. Plus, because she probably has a very little crush on him. Even though she acts tough, we understand how she really feels. 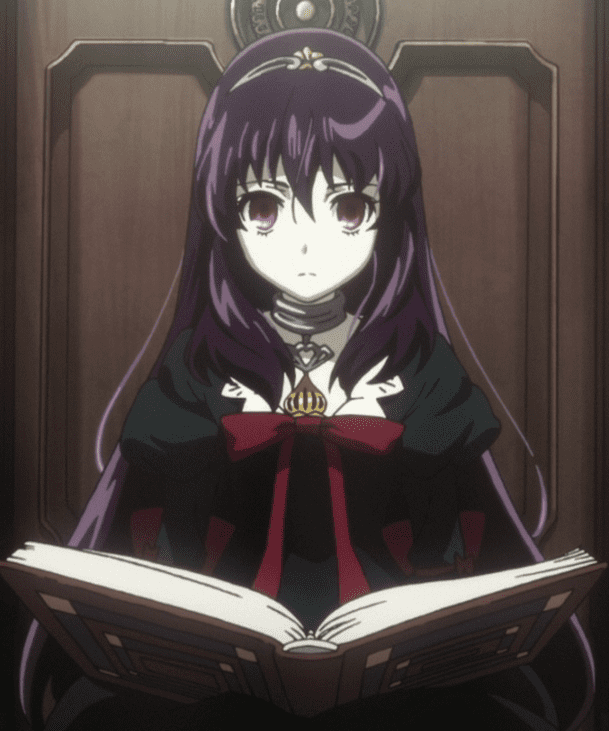 Dalian from ‘The Mystical Archives of Dantalian’, (Gainax)

As mentioned above, Dalian is a character in the “Dantalian Mystical Records”. This TV and Web Anime series is available for you to watch on online platforms such as Crunchyroll and Funimation.

6. Shirahoshi from “One Piece”.

Shirahoshi is a huge and beautiful mermaid who is the princess of the Ryugu kingdom. Being an emotionally sensitive person, she cries for every little thing which is even a little overwhelming. Being the youngest child in her kingdom, everyone loved her and cared deeply about her, and as a result, she wasn’t used to being scolded or yelled at. Therefore, whenever someone slightly raises their voice towards her, Shirahoshi starts to cry. She is a polite girl who always thinks of her family and loved ones before she thinks of herself. As she has always been protected, she lacks a lot of experience and judgment. She also makes a promise to Luffy that she will try not to cry as much as she does. Nonetheless, Shirahoshi is a kind person who does not hold any grudges against people. 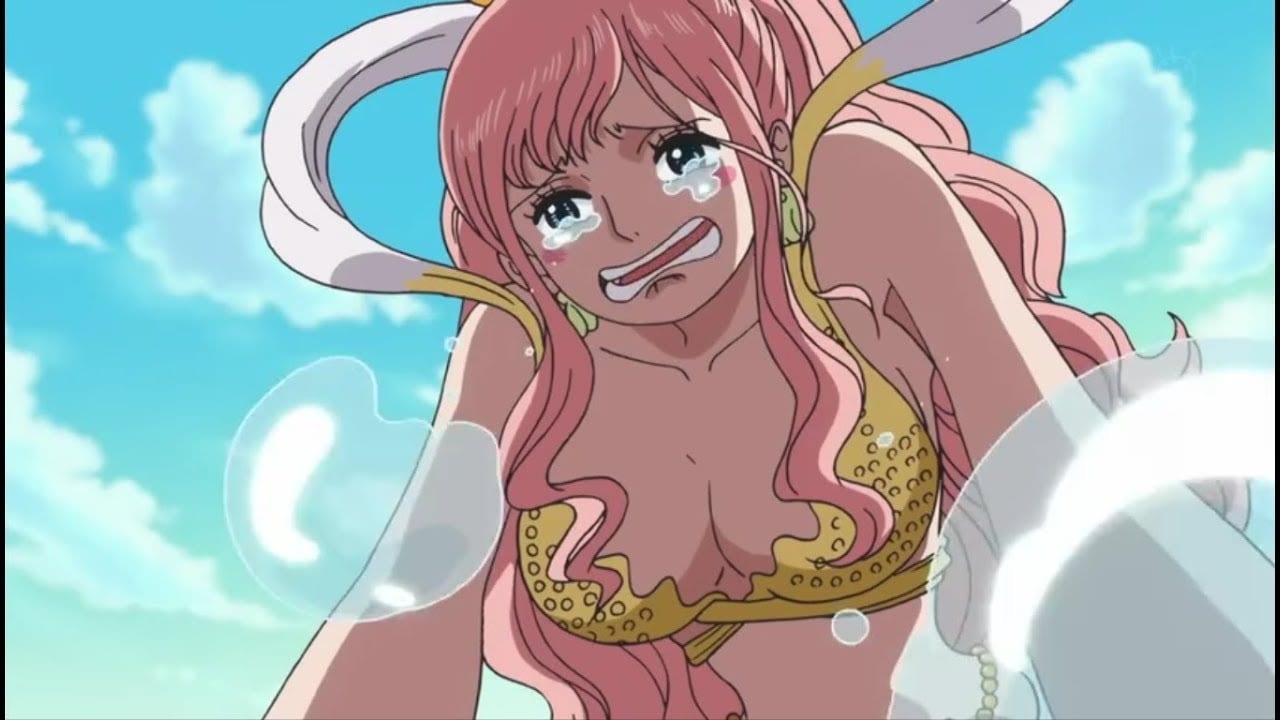 Shirahoshi from ‘One Piece’ (Toei Animation)

As mentioned above, Shirahoshi is a character from “One Piece”. This TV and Web Anime series is available for you to watch on online platforms such as Netflix, Crunchyroll, and Hulu.

7. Mizore Shirayuki from ‘Rosario to vampire’

Mizore is a depressed, suicidal, and lonely girl who has always been found with a lollipop in her mouth. She would also be harassed by one of her teachers until Tsukune saved her. She joined his press club after this incident as she began to fall in love with him. Mizore barely expressed his emotions and spoke at a very low volume. She, without any shame, tracked Tsukune by hiding in unusual places in order to see him. Mizore disliked fighting for Tsukune’s attention and had repeatedly threatened him not to add more women to their press club. It is obvious how much she wanted to marry him and have her children. She also occasionally flashed Tsukune to try to seduce him. Overall, Mizore was a kind person who knew how to fight for what she really wanted. 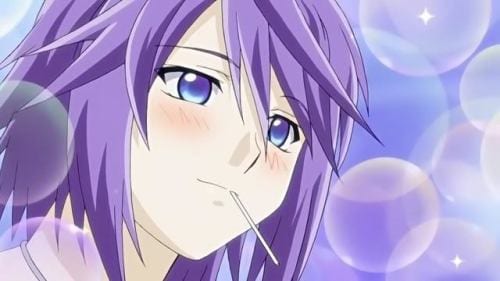 As mentioned above, Mizore is a character from “Rosario To Vampire”. This Anime TV and Web Series is available on online platforms such as Netflix, Crunchyroll, Funimation, AnimeLab, and Hulu.

Izumi never leaves her room and has turned pale because of it. She is obsessed with using fountain pens, and so sometimes she gets a little dirty and stains by mistake. Izumi, like other typical women, doesn’t care about how she looks or what she wears. Her appearance is always a mess, as is her bedroom – always overflowing with books. Since she does no physical work other than writing books, she falls extremely ill or faints whenever she holds anything other than her fountain pen. She depends on others to take care of her, almost as if she were a child. Either way, Izumi was a delicate human being who needed attention and possibly a day off from work. 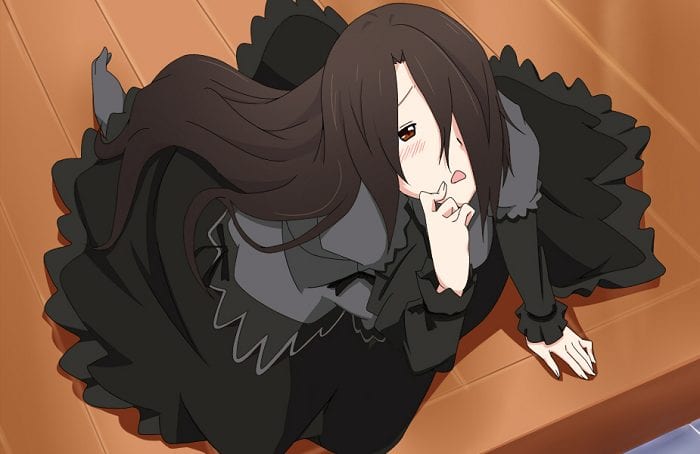 As mentioned above, Izumi is a character from ‘Working !!’. This Anime TV and Web Series is available for you to watch on online platforms such as Crunchyroll.

Also Read: Top 8 Upcoming Animated Movies Of 2021 You Must Add To Your Watchlist