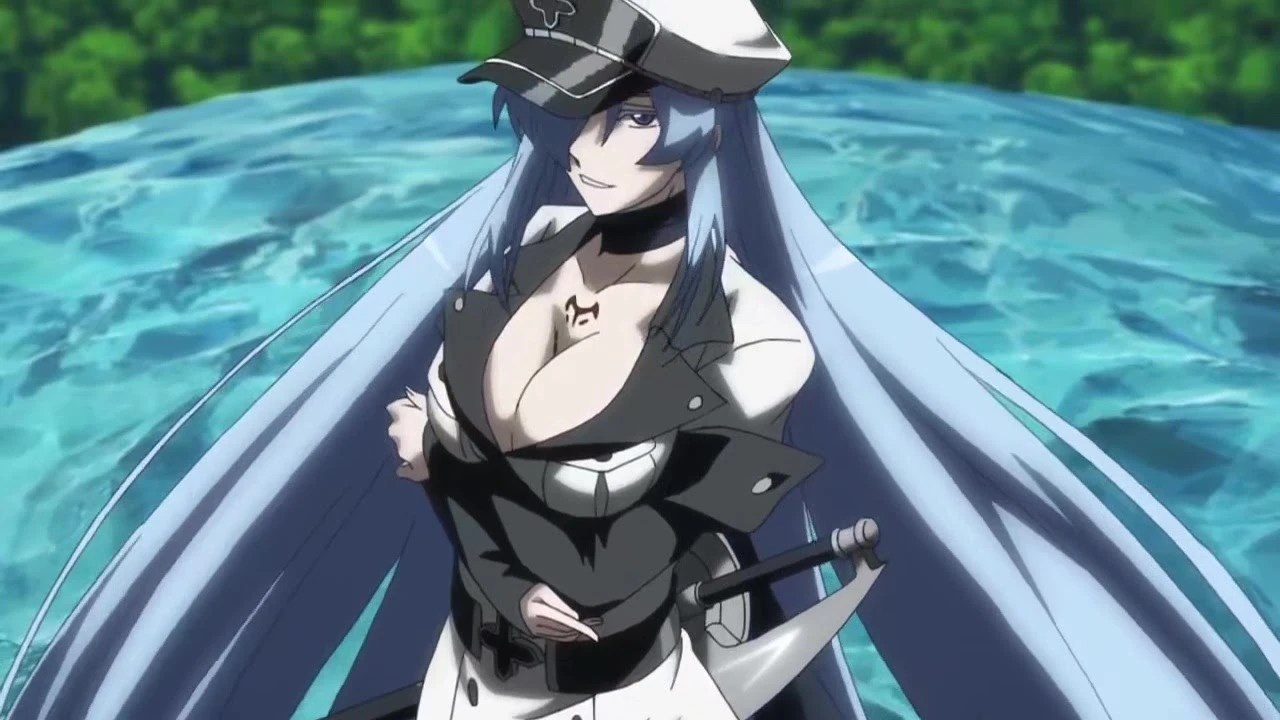 The 5 sexiest anime girls of all time

Stick ’em up, pervert. I caught you in the act.

I know why you are here. The boys at Disney and Studio Ghibli weren’t doing it for you, were they? You wanted After…. is that it, greedy bastard? Wanted to take a peek at some hot anime girls? Take a look at the screen and say you’re not hurting anyone by watching? It’s true? Say it.

Don’t play with me. I hear the same excuses all the time.

*slaps you in the face*

You say you come here looking for “waifu material”. Save it. Scum as if you were looking for one thing and one thing only: “oppai”. Oh, you don’t know your favorite Japanese word now, do you? Forgot the translation? I DO NOT BELIEVE YOU. SAY IT.

*slaps you until you say so*

IT’S TRUE. IT MEANS “BREASTS”. “BREASTS”. “TATAS”. And whatever other unhealthy terms you kids utter these days. Maybe you call them “MELONS” or “BAZOOKAS” or “SANDWICH BAGS FILLED WITH STEAMED HOT HAM”. Well, that hot ham has gone cold, kid, because the jig is up.

So you want sexy anime girls, right? Lucky for you, I feel charitable today. I will give you sexy anime girls. I’ll give you anime girls so sexy you’ll throw your disgusting anime cat-girl body pillow in the waste where he belongs. Because these girls? These girls are WOMEN. With JOBS. And BRAIN. And AMBITIONS. And (semi) EXACT BODY PROPORTIONS. AND YOU KNOW WHAT ELSE? THEY ARE TOO BEAUTIFUL TOO, BUT THAT’S NOT THERE ONLY THING TO THEM.

Listen, I’m doing you a favor. You keep moving down the road you’re on, and you’re only gonna be disappointed. Believe me, I used to be like you. They used to call me “Cat-Girl McGuillicuddy” because of the amount of obscenity that I once shoved into my eye holes. But I am no longer that person. And you know who got me out of there? These women. Those sexy, curvy women (not like that, you freak) who made me realize that being well written is the sexiest thing of all.

Listen, you can’t go wrong with Motoko Kusanagi. She might be the sexiest woman in anime history. Why? Well for one, in a medium that often reduces women to supporting roles, she is unequivocally the main character. And the main characters are sexy by default, capiche? She is the commander of an elite military unit called Section 9, which is tasked with defending Japan against cyber-terrorists and espionage from foreign governments. He is a tactical genius, a charismatic leader and a force of total destruction on the battlefield. She chose her all-male task force based on their individual skills, and yet none of these guys attempt to sexualize or disparage her for being a woman. You know why? First, because she has chosen a team of respectful professionals who will not try to make a body pillow out of her. Second, it’s because she would mop the floor with all of them if they did. Now don’t get me wrong here, Motoko Kusangi is beautiful. But the show is not on let her be beautiful. Its beauty is only a small facet of the jewel which is its overall character. As a bonus, Motoko is also one of the best LGBT characters in anime. She maintains relationships with women through the many adaptations of ghost in the shell and-HANDS WHERE I CAN FUCK SEE THEM. Jesus, you are disgusting. THIS IS NOT THAT KIND OF SHOW. Of course, Motoko is dating girls. There are even a few scenes where Motoko is respondent with the girls. But unlike youthe show is not weird about it. Motoko’s sexuality is only a small aspect of a very complete and multi-faceted woman.

See here’s the thing about Full Metal Alchemisthis lousy with hot girls. He has Brother Elric’s badass mentor, Izumi Curtis. There’s icy Commander Olivier Mira Armstrong, and the sexiest of them all, of course I’m talking about—NO, I’M NOT SPEAKING LUST. You would think I meant Lust, right? That’s the name, isn’t it? Of course, you monster. Now listen, Lust is a great character. Of course she is strongly objectified but she uses it for her advantage. Yes, it’s 100% body pillows, BUT I’M TRYING TO KEEP YOU AWAY FROM THINKIN’ THINKY THOUGHTS LIKE THAT. So let me draw your attention to Riza Hawkeye.

Riza Hawkeye is a sniper and firearms specialist, and is Roy Mustang’s personal bodyguard. Let me repeat, this is Roy Mustang’s BODYGUARD. You know Roy the Flame Alchemist? The guy who blows things up in columns of fire? This guy is a BADASS. And HE chose her as a BODYGUARD. That means she’s DOUBLE THE BADASS. Riza is the person to whom he entrusts his LIFE. And I can see why. Riza is the perfect soldier. She is logical, disciplined and a fierce fighter. She seems a bit cold and prickly on the outside, but inside she has a warm and caring heart. She is dedicated to protecting others, serving her country, and looking damn good while doing it. Maybe you should try doing one of those things, huh? How about starting with the last one? Seriously, take a shower, you’re disgusting.

I see you coming. These badass military guys work their magic. And perfect for having a little crush. Or a big scary crush, knowing you. Well, against my better judgment, allow me to introduce you to another overwhelming woman in uniform: Hange Zoe. On the one hand, Hange is smart. REAL smart. Obviously you can tell by her glasses, that only smart people wear glasses in anime, but she’s smarter than all the smarties who have ever been smart on your TV screen (or laptop, you probably have everything pirated, right?). Well if you’re gonna hack something I’d rather it be her than any of them A play types. Anyway, like I said, Hange is a real smart cookie. She is the Scout Regiment’s main inventor and has developed countless pieces of military technology that have saved people from being gobbled up by the Titans time and time again. Her genius intellect brought out her comrades in jam after jam, and it made her an invaluable asset to the military. She’s also fun, funny, and quirky as hell, and she LOVES titans. It’s a bit of a weird obsession, but you know all about it, don’t you? You two would probably get along perfectly.

I’m hesitant to show you that next lady on the list, because I just KNOW you’re going to be thinking dirty thoughts. But I trust you. Can you say that I trust you? I’m taking off your hand ties. Please keep them where I can see them.

Okay, so Revy is drawn in a more traditional “sexy anime girl” way, but my goodness what a great character she is. For one thing, it will kill you. She’s a killer, plain and simple. And she loves it. She had a difficult life. She was raised in poverty and found work as a mercenary. She works for the Lagoon Company, a four-man criminal organization that smuggles goods across the seas of Southeast Asia. She has little respect for human life and does not believe in any higher concept such as God, love, or the general betterment of her fellow man. So why is she sexy? Honestly, the sexiest thing about her is that despite her tough and brutal life, she’s still able to open up. Through black lagoon, it is hinted that she is secretly in love with a member of her crew, a former employee named Rock. She expresses fondness for Rock, and despite being about as sweet as a kick in the shin, she still manages to find room in her little black heart for him. In the first season, the two share what has to be one of the most romantic “kisses” in anime history. She and Rock are about to smoke cigarettes in the back of a car. She manages to light hers, but Rock can’t find a lighter. So what does she do? She bends down and lights her cigarette with his own while holding it in her mouth. It’s adorable, sexy, and delightfully true to character. What is that? No, you can’t take a puff of my cigarette. Stop looking at me like that. Jesus.

Celty Sturluson is the only woman on this list who isn’t actually a woman. She is a dullahan, a creature of Irish myth and legend. A dullahan is a spirit that rides a black horse while carrying its own head in its hands. So how does a girl who isn’t really a girl hide this fact in modern Japan? She turns her horse into a motorcycle and wears a motorcycle helmet over her headless neck. It sounds scary, and it is. Again, not as scary as you. But for the most part, it’s pretty adorable. Like all the other girls on this list, she is a certified badass and is able to manifest a scythe made of literal darkness to fight. And fight she does. At the start of the series, she saves a young woman who is kidnapped by a group of sex traffickers. And yes, she uses the scythe on them. It’s awesome. She is also a person with cosmopolitan interests and has many hobbies. She loves movies and video games, and she’d probably even watch anime with you. Just not THAT kind of anime. Honestly, the sexiest thing about Celty is that she’s fun and upbeat. She loves life. She spends her days riding motorcycles, talking about aliens, and helping people. I can’t imagine anything sexier than that. I’m sure neither do you. It was not an invitation to try. I’m serious. DO NOT TRY. HANDS WHERE I CAN SEE THEM.

I need a new job.

—The Mary Sue has a strict commenting policy that prohibits, but is not limited to, personal insults towards somebodyhate speech and trolling.—

Do you have a tip we should know? point[email protected]