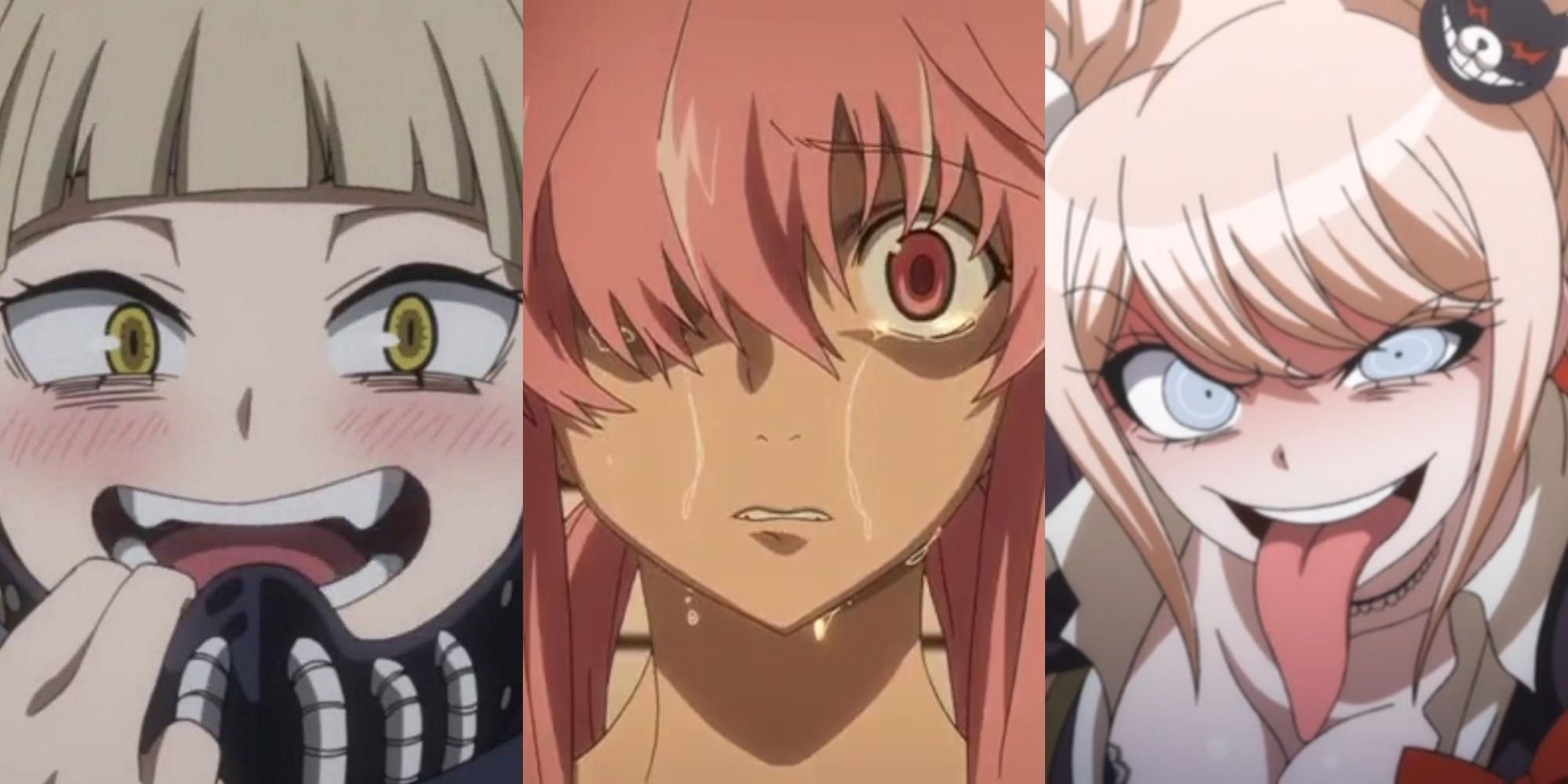 RELATED: Vinland Saga: The Worst Things Askeladd Did That Made Him A Villain

Thanks to these dark and imaginative anime girls, the anime world smartest female characters faced demanding challenges that helped them become the heroes that fans fell in love with. Anime viewers can find all kinds of dark and twisted characters in a wide variety of shows who stop at nothing to achieve their goals or just create suffering and destruction wherever they go.

Updated on November 12, 2022 by Via Erhard: There are plenty of deadly and poisonous female anime characters who had surprisingly intriguing and complex personalities which make the world of anime much more entertaining and terrifying. These powerful and dark anime girls have some of the highest kill counts and some of them possess such immense abilities that they can easily wipe out entire cities or countries. However, the most dangerous anime girls are those who find pleasure in causing pain and fear to their victims. These fearsome female anime characters can be found in both classic and new anime shows that have given their fans some of the most intense nightmares of their lives.

Android 18 is one of the most powerful female characters in shonen anime who had a rather sadistic side. She also had one of the most interesting character arcs in Dragon Ball Z since she was one of the few mortal villains to turn the tide and become a heroine. However, during her time as a villain, she killed hundreds of thousands of people just for fun or because she was bored.

For a long time, she was one of the most unstoppable and cruel villains in Dragon Ball Z who then ended up marrying one of the franchise’s nicest heroes, Krillin. DBZ follows the adventures of Goku and the Z Warriors as they attempt to protect Earth and battle some of the universe’s most terrifying and powerful villains.

Neferpitou AKA Pitou is the most powerful and evil humanoid chimera ant that has ever lived. She is easily one of darkest anime girls who can easily tear off limbs or entire human heads without straining. She was also one of the most ruthless anime killers who enjoyed toying with her victims both living and dead.

She also had one of the most interesting personalities on the show and was a curious, cute, yet terrifying villain. Hunter X Hunter is one of the darkest anime series with epic battles and dangerous hunters. The story follows Gon’s adventures as the young boy sets out on a dangerous journey to find his father who is one of the best hunters.

Noriko was one of the deadliest space pilots who killed her enemies, she did it without mercy and without doubt or regret. While mostly a quiet character, she changed when it came to fighting and turned into a killing machine while piloting her space robot.

Norkio is also one of anime girls with the highest number of kills and one who was one of the most ruthless fighters of all time. Gunbuster is among the best sci-fi anime it is also one of the most underrated classic anime shows. The story follows the adventures of Noriko as the young girl is selected to be one of the essential pilots who will have to defeat the alien lifeforms.

Daki is one of darkest anime girls of all time who was also one of the most powerful and terrifying demons of demon slayer. She was one of the strong-willed demons who disliked taking orders from others and was especially dangerous when angry.

She was also one of the Upper Rank Six Demons who became even more powerful when her brother was so attached to her that she became immune to even being beheaded. demon slayer is one of the most heartbreaking and chilling anime series of all time. Its story follows young Tanjiro who sets out to become a demon slayer after most of his family members are murdered and his sister is turned into a demon.

Kasane is one of the strongest characters and greatest antagonists in Durarara!!. She is a skilled fighter who can use her masterful sword fighting skills to defeat almost anyone. Thanks to her calm demeanor and ability to control her emotions at all times, no one knows that she is a mean, calculating and cold-hearted.

Durarara!! has some pretty unique and powerful characters with exceptional skills, and it’s one of the few shows that have characters able to manipulate darkness. Its story takes place in a dark fictional part of Tokyo where all sorts of dangerous creatures roam the streets alongside humans.

Yuno Gasai is one of darkest anime girls and is one of the most popular yandere girls in anime. Although she may seem like a lovely young girl, she is actually a ruthless murderer who would do anything to ensure that she and Yukiteru survive the deadly game.

RELATED: JoJo: villains who would be better as heroes

Future Diary is one of the scariest anime like Squid Game with a lot of violence and surprising deaths. It’s about a group of young children who are all given a diary from the future that they can use to fight to survive the cruel game of the evil god of time and space.

Esdeath is one of most powerful dark anime girls who liked to use his power to cause pain and suffering. She especially despises the weak and thanks to her sadistic personality, she not only causes physical harm, but also enjoys manipulating others to cause great emotional agony.

Akame Ga kill is an exciting action anime about Tatsumi who leaves her safe village in hopes of finding a job and earning lots of money. However, soon decides to join a group of assassins called Night Riad to fight against the corrupt Empire that is causing its helpless people to suffer.

Himiko is my hero academiathe cutest and darkest character who wants to become as menacing and deadly as The Hero Killer. She is also one of the strongest members of the League of Villains. She has a weird sense of humor and a strange infatuation with Deku, but Himiko is a great fighter and while she may not seem like she’s actually quite smart.

RELATED: Best Action Anime To Watch If You Like Lycoris Recoil

my hero academia is a very motivating anime with lots of touching moments of the series it’s still not without darkness and epic battles. Its story follows Deku after he finally obtains a very special Quirk and embarks on a difficult and often painful journey to become a true hero.

Rize Kamishiro is TOkyo Ghoulis the terrifying bulimic. She looks like a harmless and shy young girl, but she’s actually a bloodthirsty monster who can’t stop eating humans. Not only does she kill her victims, but she enjoys playing with them and torturing them. Thanks to her sadistic personality and large appetite, she is one of the darkest characters in the series filled with terrifying ghouls.

There are only a few dark anime like tokyo ghoul and even fewer have such a high number of creepy and dangerous creatures as this iconic show. tokyo ghoul is about a young boy named Ken who is attacked by Rize but due to a freak accident ends up being turned into a half-ghoul.

3/12 Miyo Takano – Higurashi when they cry

Miyo Takano is one of darkest anime girls who not only was able to keep his true identity from the other characters, but also from the fans of the series. She is a cruel mastermind behind Oyashiro’s curse and is obsessed with immortalizing herself and her grandfather’s research. She loves to manipulate and use people as guinea pigs without caring about the suffering and pain she causes.

Higurashi when they cry is one of the most heartbreaking and terrifying anime series with mature themes and some surprising comedy elements. It’s about a young group of friends who live in a fictional Japanese village terrorized by mysterious curses.

Lucy is the sweetest and most dangerous dark anime girl in a person because of their split personality disorder. While Lucy is normally a kind and even naive young girl, her other personality is a brutal and cruel killing machine. Even though Lucy wants to be good, she remains one of the most dangerous anime characters because of her uncontrollable side.

elf lied is an exciting yet violent anime about two college students who meet the seemingly harmless Lucy, who is secretly a serial killer on the run and is set in a world where a mutant race, called Diclonii, wants to kill all humans and take over the world.

Junko Enoshima’s cruelty is unmatched. She finds great pleasure in causing suffering and pain to anyone she can. His highly toxic personality and intelligence make him a particularly dangerous character. She feels no remorse and is only driven by the joy she derives from seeing others suffer emotionally and physically.

Danganronpa is a scary show with lots of sad deaths in the series and it follows 6 students who are locked inside their school and are forced to kill each other. However, they will also have to go through a trial without being found guilty.

AFTER: Best anime with female protagonists

2022-11-12
Previous Post: Virtual YouTuber Kizuna Ai is launching an anime series in 2023
Next Post: 10 Shonen Anime Series That Should Have Been Shojo Instead