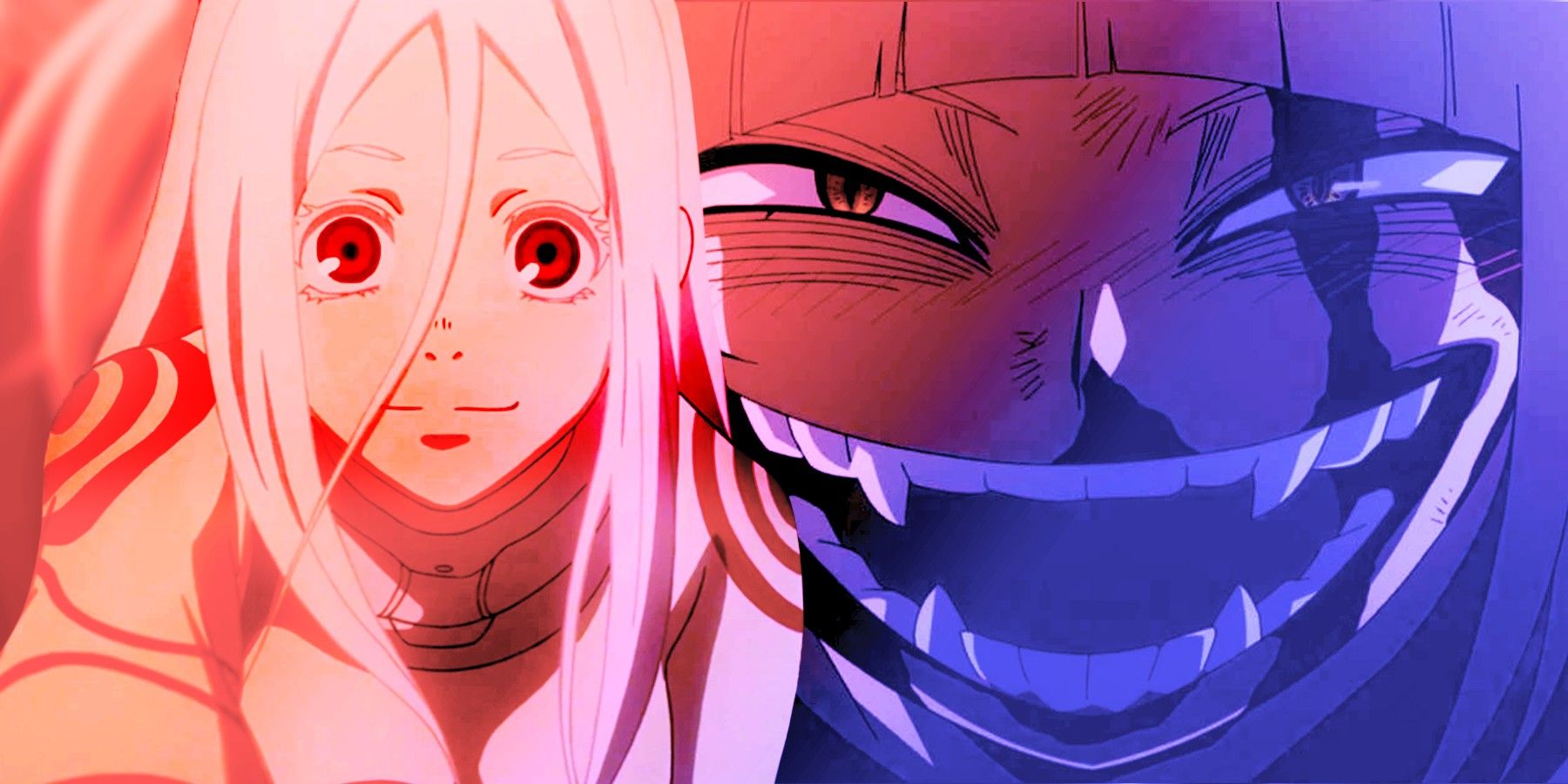 14 Anime Girls Who Still Give Us Goosebumps

When we think of anime girls, a very specific image tends to come to mind. Often cute with impossibly fluorescent and voluminous hair, stereotypical anime girls are feisty yet naïve and innocent enough to need the protection of the protagonist. On the other hand, there are anime girls who are total badasses and reject the damsel in distress trope.

RELATED: The 10 Most Well Written Female Anime Characters Of All Time

Then there are classic creepy and cute yandere types that become the kind of monsters that would make Freddy Krueger check under his bed before he went to sleep every night. These anime girls have terrorized their peers and audiences, cementing themselves among the scariest characters in anime.

Updated on June 12, 2022 by Sarah Martin: Since this list was released in 2020, we’ve added a few more anime girls that still give fans the creeps. These girls range from classic yandere types to downright manipulative villains. While some have become fan-favorite characters, others have left a sour aftertaste.

Unfortunately for Saki, her psychic ability resulted in constant ridicule from her classmates as a child, becoming the scapegoat for every unfortunate thing that happened. Luckily, Tohru helped her control those powers and accepted her as she was.

Saki always dresses in black and has an oddly deadpan attitude. She can read minds and pick up “waves” to gauge a person’s mood. Once, Kyo wondered how Saki could survive in the heat with layers of black clothes. Saki read her mind and answered out loud. This panicked Kyo to no end. Saki is mysterious and quiet but is one of Tohru and Arisa’s most loyal friends.

A running gag in Komi can’t communicate is that everyone worships the ground that Komi walks on. Unfortunately, Yamai goes too far and becomes absolutely obsessed with her. She has pictures of Komi taped all over her room and even kidnaps Tadano for getting too close to Komi.

Yamai went so far as to lock Tadano in a closet and tie him to a chair to keep him away from Komi. Even now, Yamai still does creepy things like trying to take photos up Komi’s skirt and following her everywhere.

Makima comes across as an ally at first, but she’s absolutely terrifying. It’s only at the end of Chainsaw Man that her true identity as the Control Devil is revealed, and no other character can fill the role as well as her. Makima is manipulative and serves as the ultimate puppeteer during the series.

Makima chained Denji with the promise of a romantic relationship, only to kill everyone dearest to her because she had no interest in him at all. She was a master at playing with people’s psyches and eventually sought to break Denji’s, so she could take advantage of Pochita.

There are lots of adorable JoJo’s secondary characters, but Yukako is definitely not one of them. She’s not a yandere, but she’s an obsessive stalker who should have been defeated when the heroes had the chance. Yukako is obsessively in love with Koichi and takes extreme measures to stay close to him, such as setting another girl’s hair on fire and then kidnapping Koichi.

Yukako attempted to abuse Koichi to develop Stockholm Syndrome, but was overpowered by her Stand, Echoes. unlike others JoJo’s antagonists, Yukako had a mini-redemption arc and unfortunately ended up with Koichi.

A villain of my hero academia, Himiko possesses a shape-shifting ability, which she can trigger by ingesting another person’s blood. Himiko looks like a typical cheerful animated schoolgirl, but quickly goes into a murderous rage at the first inconvenience.

RELATED: 10 Harsh Realities Of Being Himiko Toga In My Hero Academia

In addition to her creepiness, Himiko has a twisted view of interpersonal relationships. She once attempts to befriend two teenage girls while simultaneously trying to kill them. Even those she admires are not immune to her murderous tendencies. Himiko has expressed a desire to kill and “become” her role model, Stain.

Road Kamelot is an anime villain with a childish nature. Considering the fact that she is at least 35 years old, this personality trait adds to her creepy side. Kamelot can also dress up as a talking doll, and the dolls are always scary.

In a show where the heroes must destroy the corrupted souls of resurrected loved ones, Road’s creepy nature fits right in. She is sadistic and will kill her own subordinates just to spite Allen Walker, the protagonist of D. Gray-man. Also, despite claiming to be in love with Walker, Road once stabbed him in the eye with a candlestick — a classic creepy anime girl move.

Prison school is an extremely bizarre anime about an underground school prison. Any of the sadistic female student council members could be considered a creepy anime girl, but Hana Midorikawa really takes the cake with the file baked inside.

At first glance, Hana looks like a cheerful witchy neighbor. She loves four leaf clovers and steeping dandelion tea. By second impression, Hana is actually a violent sociopath with a urination fetish. That’s not even the end of his creep factor.

When most teenage girls want to shake things up, they get a haircut. Junko Enoshima shakes things up by making her classmates kill a classmate. She achieves this by using a robotic teddy bear to stalk her victims and by murdering her own twin sister.

Obsessed with despair, Junko is the villain of Danganronpa. His ultimate goal is to inflict despair on others by causing them to make terrible decisions. When she is finally unmasked and backed into a corner, Junko happily complies with a manic laugh.

Adopted for the sole purpose of being used for human experimentation, Shiro had no choice but to become a creepy anime girl. The painful experiences caused Shiro’s body to crumble and she developed a second personality, “The Wretched Egg”, to cope. Technically, it’s the Wretched Egg who is the real scary anime girl.

The experiments also led Shiro to develop supernatural abilities. The Wretched Egg uses these powers to murder all of his adoptive brother’s classmates and frame him for the crime – and that’s just the first episode.

Buried alive near her own village at the age of seven, Ai Enma crawled out of her grave in a spirit of revenge. She burned down the whole village, killing all the inhabitants.

As punishment for this horrific (though justified) act, Ai was sentenced to spend her afterlife as “Hell Girl”. Frozen as a child, Ai dragged souls to hell whether or not the victims deserved their fate. The cold and callous manner in which Ai went about her job is what made her truly creepy.

Image if Casper the Friendly Ghost ripped out Christina Ricci’s tongue in the second act of 1995 caspar film. It’s basically Sachiko. An antagonist of corpse party video game series, Sachiko unleashes a host of horrors in the OVA series Corpse Party: Tortured Souls. In the anime, Sachiko is the ghost of an elementary school student who cut out her classmate’s tongues shortly before her death. In the afterlife, Sachiko continues her reign of terror by torturing children in a living hell called Heavenly Host Elementary School.

Sekai and Kotonoha are the ultimate enemies. Sekai sets up Kotonoaha with Makoto, a boy from the school. Soon after, Sekai has an affair with Makoto and things get out of hand. Someone is stabbed to death with a kitchen knife, someone has their stomach cut open and someone walks away with their head cut off. There’s a point to be made that both girls are scary, as both are driven mad because Makoto is just plain horrible person.

While many creepy anime girls don the disguise of an innocent schoolgirl, no one pulls it off as well as Yuno. Sweet and innocent on the surface, Yuno is quickly revealed to be a cold and obsessive psychopath.

RELATED: Which Shonen Villain Are You Based On Your Zodiac Sign?

Stalking a crush on social media is bad enough. In Future Diary, Yuno has a supernatural diary that shows her everything that will happen in her crush’s life. She willingly uses it to kill anyone who might harm her. Certainly, having seen the love of his life die in an alternate reality could lead anyone to drastic measures.

1 Esdeath is the Ice Queen of the Empire (Akame Ga Kill!)

The Ice Queen of the Empire, Esdeath of Akame Ga kills! is a manipulative sadist. She justifies torturing her enemies and killing innocent people by following her father’s creed: the strong survive and the weak die. As general of his empire’s army, Esdeath once forced the prince of a failed rebellion to strip naked and lick his boots before killing him.

Most creepy anime girls let their unbalanced nature turn them into outcasts with no real power in the social structure. What makes Esdeath so terrifying is the fact that she controls her sadistic urges just enough to stay in a position of authority. This allows Esdeath to unleash her cruelty on even more helpless people. That said, she has no loyalty to the empire she serves. Esdeath once said that if the Empire fell, she would start another war herself, so she could keep killing.

2022-06-12
Previous Post: 10 anime series too sad to watch twice
Next Post: 5 Marvel Characters Who Deserve Their Own Animated Series