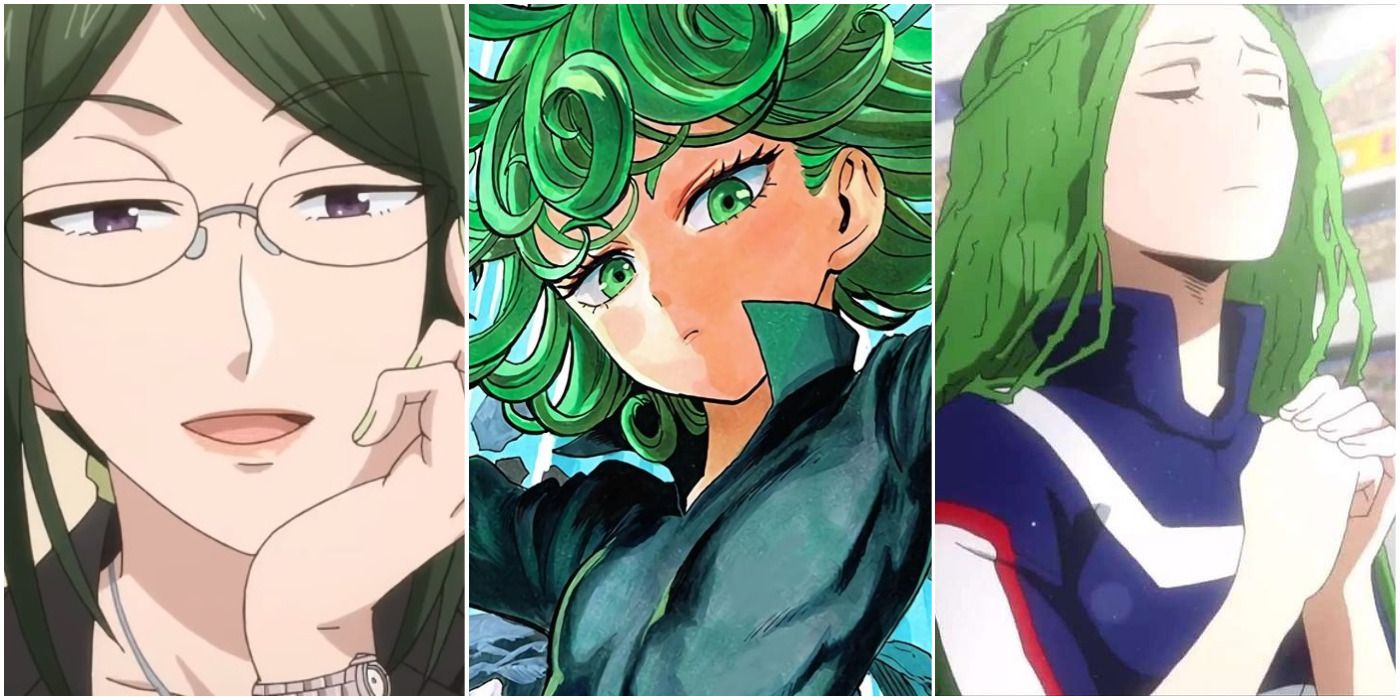 The world of Japanese animation is creative and imaginative, with characters of all shapes and sizes ranging from caped superheroes to cute talking animals and hapless isekai heroes, among many others. Anime characters are known for their many tropes, conventions, and even clichés, and that includes cosmetics, such as their hair color.

As for the visuals, some animated series like Vinland Saga keep it realistic, but others go wild with their imaginations and feature characters with naturally purple, blue, or green hair, among other colors. Green hair can be found in a variety of anime shows, regardless of genre or tone, and a handful of anime girls are well known for their beautiful green hair.

Optimistic Mashiro Kuna is one of eight Visoreds, ex-Soul Reapers who were given the powers of a Hollow imposed by Captain Sosuke Aizen. Mashiro is the funniest and happiest of the eight Visoreds, and she also has the most unique fighting style of them.

Mashiro wears an old-fashioned superhero outfit, in sharp contrast to her old Soul Reaper uniform, and she enjoys throwing strong kicks to take out enemies. She’ll also announce some dramatic names for these kicks, whether it’s in training or a real battle.

9 Ibara Shiozaki is a pacifist hero (My Hero Academia)

Ibara Shiozaki is one of the strongest students in Class 1-A, and she was seen fighting at the UA Sports Festival and the Joint Training Arc. Ibrara is almost like a nun or a cleric, a gentle girl who refuses to shed blood even in the line of duty. Lucky for her, Ibara’s green hair isn’t just hair – it’s part of her Quirk.

Ibara’s vine-like hair can quickly grow and lengthen, and it can even burrow underground and appear to surprise Ibara’s enemies. These vines can form a shield, and they can also grab a villain and hold him back until help arrives.

Futaba Igarashi is a small but fierce Tsundere character who doesn’t like to be patronized or disparaged. She has a lot to prove as a professional in the workplace and has always been the independent type who wants to earn everything she has. She has the courage of a true hero.

RELATED: 10 Of The Most Popular Pink Haired Anime Characters You Forgot Existed

Futaba is a kind, helpful person with incredible integrity, and she won’t leave a job half done or abandon a friend in need. In college, she inspired her new friend, Natsumi, to pursue a new hobby and find pleasure in it, following Futaba’s example of appreciating art.

Most wizards fight with elemental magic, summoning, or even their bare fists, like Lucy Heartfilia and Elfman Strauss, but Bisca Connell and her husband, Azlack, are both marksmen who sustain every bullet or shotgun pellet from hunt with magic, making them deadly in battle.

Bisca prefers sniper rifles in combat, and she’s an outstanding shooter who can guide her bullets to hit any target, regardless of distance. She was a star during the battle between the Fairy Tail Guild and its rival, the Phantom Lord Guild.

Lenalee Lee is one of Allen Walker’s best friends and allies, along with Yu Kanda and Lavi, and she is a fierce and staunch ally who fears no enemies. Like Mashiro Kuna, Lenalee is a green-haired fighter who favors kicking, and her fierce kicks can turn most Akumas to dust.

RELATED: 10 Anime Characters With Powerups That Change Their Hair

Lenalee’s innocence is stored in his legs, which not only increases his kicks, but also allows him to run and jump across the battlefield and outsmart most Akumas. She had long hair in two ponytails. He was then cut short, but started pushing again.

Hanako Koyanagi is a green haired office worker like Futaba Igarashi, and the two would get along if they met. When it comes to hobbies and interests, Hanako is a dedicated cosplayer and she has the skills and patience to create her own costumes and props from scratch. She can also use makeup to make herself look like any character she wants.

Hanako can easily wow her friends with her dazzling cosplays, and whenever she’s not in a costume, Hanako is a good choice for a trip to the bookstore to find the hottest BL titles with her passionate colleague and BL friend. , Narumi Momose. Hanako’s boyfriend Taro doesn’t like BL too much, however. He prefers to watch colorful animes.

The story of Miss Kobayashi’s Dragon Maid features a variety of dragons and other fantastic monsters that can take on human form, from the dragon maid Tohru to the adorable little Kanna and the whimsical Fenrir, not to mention the cheerful and easy-going Lucoa, who truly is Quetzacoatl.

RELATED: 10 Anime Characters Who Run At The Cafe

Lucoa is powerful but doesn’t like to fight. Instead, she’d rather relish the little things in life and have fun with her new human friend, Shota. Lucoa is known for her pale yellow-green hair and rather full figure, and she enjoys teasing Shota, to which Shota slowly gets used to.

Nelliel Tu Odelschwank was once the 3rd Espada until she was injured and betrayed. She then joined Ichigo’s team in her toddler amnesiac form until Ichigo needed help against Nel’s old nemesis, Nnoitora Gilga. Nel reverted to his original form of Nelliel.

Nelliel wowed Ichigo and the fans with her incredible combat prowess and mature demeanor, and she risked her life to protect Ichigo from the thug Nnoitora. She has bright green hair in color Bleach manga pages. Although, in the anime, it looks more like a mint green or an ocean green.

2 Tsuyu Asui is smart and heroic (My Hero Academia)

Also known as Froppy, the Hero of the Rainy Days, Tsuyu Asui is one of the most popular Class 1-A characters for many reasons, and she is also highly regarded by her classmates. Tsuyu is the oldest of three at home, and she still has a calm, mature big sister attitude that can easily inspire or put a teammate at ease.

Tsuyu is a brave but patient and intelligent hero who thinks, just like his green haired classmate, Izuku Midoriya. The two are alike in many ways beyond their crisp green hair, and they’re an inspiration to everyone in Class 1-A.

1 Tatsumaki is the Tornado of Terror (One-Punch Man)

Tatsumaki, or Tornado of Terror, is a tiny but incredibly powerful superhero who ranks # 2 in the Hero Association, behind Blast himself. Tatsumaki is known for her highly advanced telekinetic powers, easily lifting and throwing objects several times her size with impunity.

Tatsumaki is popular because of his stylish outfit, fun fun, fun chemistry with the other characters, and of course, his amazing combat prowess. She also has a talented green haired sister, Blizzard, a B-rank hero.

Next: 5 Anime Characters Who Dress To Impress (& 5 Who Don’t Care)


Louis Kemner has been a fan of Japanese animation since 1997, when he discovered Pokemon and Dragon Ball Z in elementary school. He is now a bigger anime / manga fan than ever before and is ready to share what he knows with readers around the world. He graduated from high school in 2009 and received his BA in Creative Writing from UMKC in 2013, then put his skills to good use in 2019 with CBR.com. He’s always on the hunt for a wonderful new anime to watch or a manga series to read. You can reach him at [email protected]